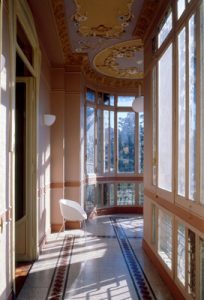 Villa Rosa, home of the museum, is a beautiful Art Nouveau building. It was designed by  engineer Nicolò Campora from Savona, who had studied and worked  in Turin and was interested in the technical and styling innovations of international architecture. The Villa is part of a series of Art Nouveau buildings which spread in the town at the beginning of the 20th century and are still largely existing. Of all the examples of  Art Nouveau style in Altare, Villa Rosa is the most homogeneous and stylistically representative achievement. Monsignor Giuseppe Bertolotti, curate of the town for over sixty years, commissioned the work. Though of humble origins, and with a large family, monsignor  Bertolotti had a brilliant ecclesiastical career; he became monsignor but he later refused the office of bishop vicar at San Giovanni in Laterano  to remain in his hometown.  Bertolotti is remembered not only for his many theological writings and  for a variety of restorations and embellishments of  churches, but also for the commissioning of many buildings in and around Altare. Dating from 1906, Villa Rosa was used as a summer residence by the Saroldi  family, but in time it was used for shorter and shorter periods. The Villa was declared a protected building in 1986,  and it was purchased by the Ministry of Cultural and Environmental Heritage in 1992.  Restoration works were carried out for a decade, and  in 2004 Villa Rosa was reopened to the public as the Museo dell’Arte Vetraria Altarese (Museum of Glassmaking), gaining a considerable importance to the local culture and an attractive role in the economy of the town and of the Valley. It is possible to rent Villa Rosa for ceremonies, conferences or refreshements. For further informations RENTING VILLA ROSA

“Villa Rosa – Museo dell’Arte Vetraria Altarese” is part of the Regional Museum Complex (Polo Regionale della Liguria). The Regional Museum Complex was founded in 2014 with the reform of the Ministry of Cultural Heritage and Activities and Tourism, with the aim of enhancing the enhancement of Italian museums. is the point of connection between the center and the periphery: it works to promote dialogue between state and local bodies, between public and private museums, for the construction of the regional museum system.